As a rising field within Germanistik, Asian German Studies has been a hotspot for recent scholarship on postcolonialism, orientalism, gender and sexuality studies, area studies, migration studies, and more. Asian German films, along with literature, television series, and new media, have increasingly become desirable teaching materials for courses that explore transnational aspects of German culture, history, and society. This concise Asian German filmography, compiled by Qingyang Freya Zhou (UC Berkeley), Zach Ramon Fitzpatrick (UIC), and Qinna Shen (Bryn Mawr), aims to provide a teaching guide not only to Germanists, but also to scholars in neighboring academic disciplines. For those who are interested, a longer list of Asian German films can be accessed here.

This filmography includes fifty critically acclaimed, aesthetically creative, and/or thematically interesting Asian German films produced by filmmakers in both the larger German-speaking world and in Asia, focusing mainly on East Asia, Southeast Asia, and South Asia. The list is organized geographically and chronologically. The countries represented are listed in descending order based on the size of the corresponding immigrant groups in Germany (see the figure below for exact numbers). Each entry includes both a short description that highlights unique features of the film and selected works of secondary literature—listed chronologically—that may be assigned as course readings.

The authors recognize that classifying transnational films by country might be a problematic practice. Indeed, some of the films listed complicate the model. For example, Der schweigende Stern has Asian characters with three different nationalities; viewers are left to assume the identity of Nordsee ist Mordsee’s Asian protagonist; Drachenfutter has both Pakistani and Chinese characters, and the titular character from Tschick is a multiracial Russian national but “looks Mongolian” and is played by an actor of Mongolian descent. Nevertheless, we eventually decided to keep national categories for two reasons. First, such a practice will provide clearer reference for instructors who want to quickly search for the specific materials for their courses. Second, listing the films based on the countries referenced reveals some underlying patterns in Asian German film production. For instance, the relatively small number of Japanese immigrants in Germany and the comparatively large number of Japan-themed films can reveal both a specific form of orientalism at play in the history of the German film industry and contemporary processes of Japanese-German film distribution and exhibition, which aim more for an international audience than for a domestic ethnic audience. By contrast, the considerable sizes of Indian, Pakistani, Filipino, and Sri Lankan immigrants in Germany and the relative dearth of films that portray these groups might suggest continued marginalization against some South Asians and Southeast Asians.

The current list is by no means exhaustive; rather it is intended to serve as an introduction to a rich and diverse repertoire of films that focus on histories of entanglement, contact zones, processes of exchange, modes of translation, and moments of physical and symbolic border crossings. A longer list of Asian German films, which includes lesser-known titles and lost films, is available here. For suggestions and comments on this teaching guide or the longer filmography, please contact Qingyang Freya Zhou (qingyangzhou@berkeley.edu). 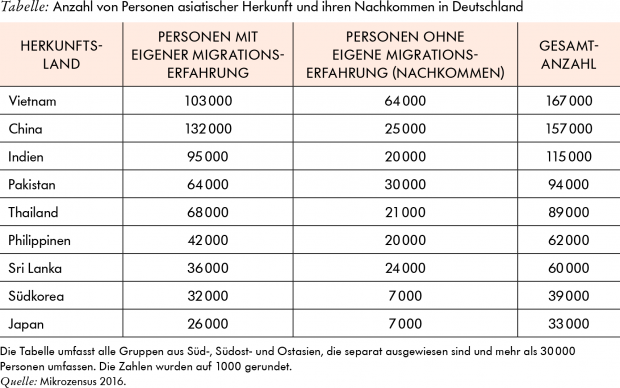 Qingyang Freya Zhou is a PhD candidate in German at the University of California, Berkeley. She received her BA degree in German, Cinema and Media Studies, and Comparative Literature from the University of Pennsylvania. Her research focuses on the literary and cinematic entanglements between East/West Germany, China, and North/South Korea during the Cold War and beyond. She has presented research on Asian German studies at the annual conferences of GSA, NeMLA, and Society for Cinema and Media Studies.

Zach Ramon Fitzpatrick is a Mellon-CES fellow and PhD candidate in Germanic Studies at the University of Illinois at Chicago. His research focuses on German film and Asian German studies. He has been a guest author for Korientation.de, a Berlin-based organization and network for Asian German perspectives. He also runs the Instagram account “Asian German Updates,” where he has garnered a following by posting about Asian German media, history, people, news, and community events throughout the German-speaking world.

Qinna Shen is Associate Professor of German at Bryn Mawr College. Her research focuses on twentieth-century German culture, with an emphasis on visual studies and Sino-German relations. She is the author of The Politics of Magic: DEFA Fairy-Tale Films (2015). Her co-edited volume Beyond Alterity: German Encounters with Modern East Asia appeared in the series Spektrum: Publications of the German Studies Association in 2014. She is currently working on two book projects: “Jiny Lan and the Art of Subversion: A Chinese-German Cultural Encounter” and “Film and Cold War Diplomacy: China and the Two Germanys, 1949–1989.”

Qingyang Freya Zhou is a PhD candidate in German Studies, with a Designated Emphasis in Film Studies, at UC Berkeley. Her research focuses on the intersections between socialist internationalism and postcolonial studies, particularly the literary and cinematic interactions between Germany and East Asia during the Cold War and beyond.
View all posts by Qingyang Freya Zhou →
This entry was posted in Archives of Migration, Asian German Studies, Blog, Filmography, Project Updates (Home Page). Bookmark the permalink.

One Response to Asian German Filmography: A Teaching Guide