Workshop on Archival Resistance and the Purpose of German Studies 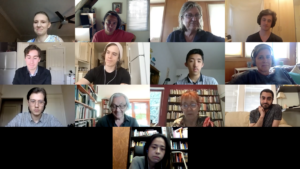 What might the purpose of German studies be in the face of global gloom and doom?

On September 26, 2020, the Multicultural Germany Project (MGP) addressed this question in a workshop organized by Kumars Salehi, Michael Sandberg, Jonas Teupert, and Deniz Göktürk in conversation with Annika Orich (Assistant Professor of German at Georgia Tech, alumna of the German Graduate Program at the University of California, Berkeley), based on her recently published article “Archival Resistance: Reading the New Right.” (German Politics & Society. Summer 2020, Vol. 38, Issue 2: 1-34.) In her article, Orich offers a reading of Th. W. Adorno’s 1967 lecture “Aspekte des neuen Rechtsradikalismus” in light of its uncanny resonances at our current conjuncture.

When our initial team started to collaboratively assemble an archive of “multicultural Germany” almost twenty years ago in the Department of German at the University of California, Berkeley, the United States were still known as the paradigmatic “nation of immigrants,” and Germany was only reluctantly edging toward official acknowledgement of having de facto become a country of immigration (Einwanderungsland). As our collection grew and was published, first in English as Germany in Transit then in German as Transit Deutschland, no one could foresee what was to come. “Multiculturalism,” all along a problematic concept, only tenable as “a project” rather than a reality of social interaction, has been discredited by the left and the right. Today, the United States have become a deportation nation, deeply divided on questions of immigration and race. On September 17, 2020, in a speech at the National Archives, marking the 233rd anniversary of the signing of the constitution, President Donald Trump called for restoration of “patriotic education,” pushing back against the teaching of critical race theory at schools in the United States. The vilification of migrants and minorities in the light of border security and national unity have become key topics of political agitation both in Europe and the United States in recent years. In Germany, the far-right political party Alternative für Deutschland (AfD), founded in 2013, became the third largest parliamentary group in the Bundestag in the 2017 election with 12.6% of the vote. Populist anti-establishment resentment has been brewing on a broader scale and recently manifested itself in protests organized by the movement Querdenken against the German government’s so-called “Corona dictatorship.”

No doubt, the study of German history offers a wealth of insight into the rise of dictatorial regimes. The reloading of inward-looking right-wing nationalism on an international scale is of current concern. Does critical theory’s analysis of the authoritarian personality and Adorno’s astute analysis of “the specter of technological unemployment,” capitalism’s permanent “declassment” and rendering redundant of workers through automation (today we would say: digitization), still hold as an explanation for the wide-spread lure of fascist movements? How do we account for incessant circular replay in anti-migration rhetoric and structural racism? What kinds of agency is possible in the face of the right’s successful inversions of the language of identity and diversity? Can archives serve as safeguards of democracy?

The turn to official archives and counter-archives does indeed hold promise as a tactic of distanced reflection, memory work for the future, maybe even resistance against revisionist history and governance. Reading in constellations, tracing the circulation of rhetorical patterns regarding collective identifications based on Heimat in historical perspective, and taking up the challenge to analyze missives from the right on a transnational scale, are important skills to train with our students. Learning to read critically will keep comparisons situated in historic and linguistic context. In this spirit, Orich proposed that the compilation of Facebook posts of the group Pegida (Patriotic Europeans Against the Islamisation of the Occident) Glaube Liebe Hoffnung. Nachrichten aus dem christlichen Abendland, compiled by Gregor Weichbrodt and Hannes Bajohr in 2015, constitutes an act of archival resistance. Digital media have created their own “rogue archives,” to quote Abigail De Kosnik, which require new tools of analysis. The purpose of German studies might be to take up these challenges. We look forward to continuing the conversation.

This entry was posted in Blog, Mission Possible. Bookmark the permalink.