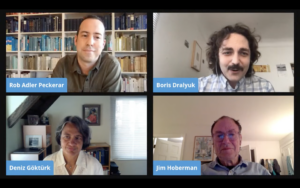 Produced in the early sound era, Comradeship features fascinating linguistic experiments. Early talkies were often released as various versions shot in different languages, with some variations. They are usually adaptations of the same script, filmed on the same set with the same crew, addressing different (national) audiences. The German version of Comradeship, Kameradschaft, premiered on November 17, 1931 at Berlin Capitol, and the French version, La tragédie de la mine, was released on January 29, 1932 in France. Set on the French-German border in the years following the First World War, Comradeship tells the story of a mine disaster in France and the nearby German miners’ voluntary efforts to rescue their trapped colleagues. Pabst’s film is a celebration of community and solidarity in times of great calamities, in terms of both the narrative diegesis and the political and economic upheavals during the last years of the Weimar Republic—themes that strongly resonate with the contemporary world we live in.

Göktürk’s introduction draws our attention to the enactment of various borders in the film: the national border between France and Germany, as represented by the customs officers and their regulation of human flow in both directions; the border between work and leisure, as symbolized by the prominent factory gates; the imaginary border in people’s minds, expressed by the characters’ initial reluctance to cooperate with or come to the rescue of the other; and the border underground, which demarcates the French mine from the German mine. These borders are all literally broken down or symbolically transcended throughout the course of the film, as workers who were previously skeptical of the other side overcome their own parochialism and gradually understand the humanity of their French/German comrades.

At the same time, the vision of transnational solidarity is also manifested by the act of linguistic border-crossing. In the penultimate scene, the French and German workers celebrate the courageous rescue mission. Despite the fact that they cannot understand each other’s words, the spirit of international cooperation resonates among the cheering crowds. Nevertheless, this triumphal mood is severely undercut by the ensuing scene, in which the French and German authorities officially restore the underground border previously demolished by the alternative rescue team (at least in the French version; the ending of the German version did not survive). Put within the historical context in which the film was produced, this abrupt cut-away from the jubilant workers’ gathering comes to foreshadow the short life of the socialist movement in Germany, as it was truncated by the ascendancy of the Nazi regime.

In addition, this rather ironic ending prompts the viewers to reconsider their understanding of the cultural dynamics at play in the film. As Nataša Ďurovičová argues in her article “Vector, Flow, Zone: Towards a History of Cinematic Translatio,” every decision in the translation process in a multilingual film, including which language to translate, how to execute it, and under what rules, is a matter of specific transnational power relationships subject to explicitly political negotiations (95). Each set of translation practices “articulates multivalent relationships between a ‘stronger’ and ‘weaker’ film culture, and thus creates various force fields in the interchange between films’ production and reception” (Ďurovičová 96). In the case of Comradeship, several German characters demonstrate their ability to understand at least some French (or even speak French so well as to be an interpreter), whereas the French characters are largely ignorant of the German language. The linguistic proficiency of the German characters corresponds to their physical mobility, technological advancement, and humanistic generosity relative to their French counterparts. Whereas the German characters repeatedly succeed in traversing the national border, none of the French characters is able to do so; in fact, a group of unemployed French miners are explicitly barred access to Germany in one of the earliest scenes of the film. While the French mine is destroyed due to mishandling of mining explosives, the German mine is better-organized, featuring cleaner work environment and cozy showers. Although prior to the accident, a triad of German workers had an unpleasant encounter at a French bar due to a misunderstanding, they demonstrate remarkable heroism by risking their lives to rescue the French miners in an unauthorized mission.

A closer examination of the French and German versions of Comradeship based on extensive archival research will undoubtedly yield more in-depth interpretations of the linguistic politics in the film. At the same time, G.W. Pabst’s long and controversial career in Hollywood, Weimar Germany, and Nazi Germany will continue to make multilingual cinema an engaging subject of inquiry for film scholars.

Qingyang Freya Zhou is a PhD candidate in German Studies, with a Designated Emphasis in Film Studies, at UC Berkeley. Her research focuses on the intersections between socialist internationalism and postcolonial studies, particularly the literary and cinematic interactions between Germany and East Asia during the Cold War and beyond.
View all posts by Qingyang Freya Zhou →
This entry was posted in Blog, Mission Possible, Project Updates (Home Page). Bookmark the permalink.